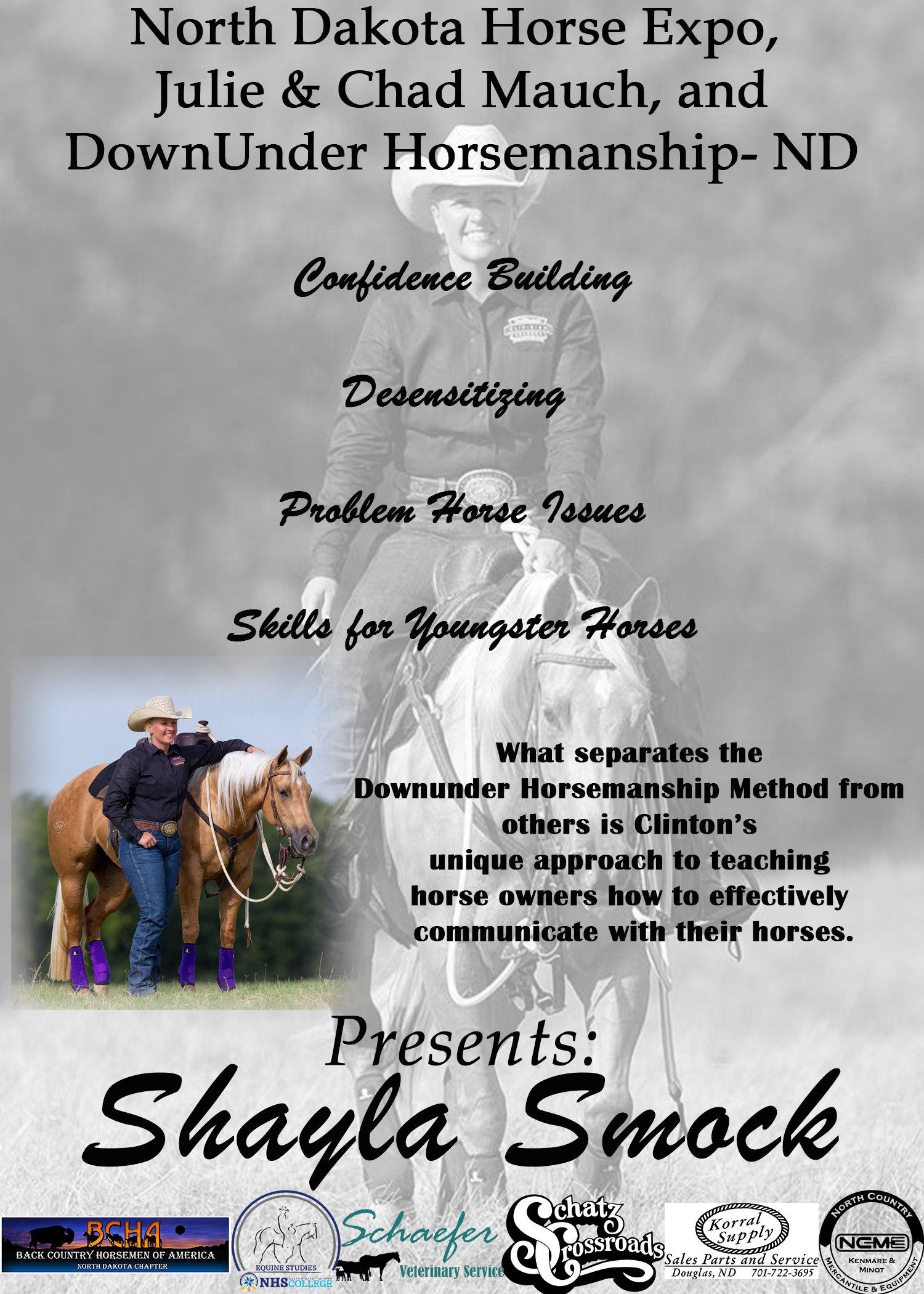 Horses are a family passion, and Shayla was in the saddle when she was three days old. She grew up participating in 4-H and FFA, and went on to compete in high school and college rodeo, where she ran barrels and poles and tied goats. She had plenty of experience starting colts. “We cowboyed them. If you got bucked off, you got back on,” Shayla says, explaining her family’s method of breaking in horses. Riding the buck out of a horse was an adrenaline rush the horsewoman chased after. “If there was a horse with a problem, that’s the one I wanted to work with. I’ve always enjoyed the challenge. When I was growing up, my friend’s grandfather was a horse trader, and he’d have us break his ponies to ride. Instead of riding them, we’d put bucking straps on them and buck them out. We were ornery,” she says. So when she purchased a bay filly whose dam wasn’t giving the weanling enough milk, it was business as normal, until a 16-year-old driver rear-ended Shayla’s trailer on the way home from picking the filly up. “Luckily, all the horses on the trailer, including the filly, were OK, and so was I,” Shayla says. “But because she hadn’t been well taken care of by her mother and was in the accident, I felt sorry for the filly and babied her.”It wasn’t long before the weanling, whom Shayla named Dinky, developed an attitude and became severely disrespectful towards humans — kicking, striking and biting them any chance she had. “She turned 2 and it came time to start her, and I was thinking that she´s the first horse that could kill me. If I got on her, I figured she’d clean my plate. What was I going to do with her?” Shayla remembers asking herself. Her first thought was “Clinton Anderson.” When she was running barrels in high school, a friend had loaned her the DVD series Clinton did with barrel racing champion Sherry Cervi. Shayla searched the Internet and saw that Clinton would be holding a tour in Des Moines and that he was looking for a trailer-loading demo horse. Getting Dinky on a trailer was the least of Shayla’s concerns, given that the mare tried to kick her head off any time she came near her, but any help was better than none. She submitted an application for Dinky to be considered, and the bay mare was chosen for Clinton to work with during that 2012 tour. “I’m a firm believer that everything happens for a reason,” Shayla says. “If I wouldn’t have gotten Dinky and then submitted her to be a demo horse, I probably would not have found Clinton and have the career I have today.” She told herself that if Clinton could get Dinky to load in the trailer, he’d make a believer out of her. “That mare drug him all over the arena and it took him a good hour and a half to get her craving to be on the trailer, but he did it, and I bought into the Method,” Shayla says. She went home and used the Method to train Dinky and her other horses. Less than a year later, in the spring of 2013, she participated in a Fundamentals Clinic at the ranch. “That´s when I got serious about the Method and decided I wanted to enroll in the Academy and become a clinician,” Shayla says. But she knew that if she wanted to succeed in the demanding program she needed to get in better physical shape. “At the clinic, my horse beat me in the roundpen, and that irritated me. I promised myself then that I was never going to let another horse get the best of me because of my physical condition,” Shayla says. She hired a personal trainer to help her lose weight and get fit. “Part of my routine towards the end was to jog forwards and backwards in an arena with deep sand so that I could be ready for roundpenning,” she says. At that time, in order to enroll in the Academy, prospective students had to attend a Fundamentals Clinic and try out for the program. So in 2014, Shayla was back at the ranch to participate in a 10-day clinic. “I was a nervous wreck. I actually got bucked off the third day of the clinic. I was so upset with myself and thought, ‘Well, I’m not getting in now.’ That was probably the best thing to happen to me, though, because I relaxed. I still tried hard, but I finally relaxed and focused on training my horse,” Shayla says.

And when she relaxed, Shayla’s ability as a horseman impressed Clinton and she was accepted into the Academy.

- Resolving problems such as bucking, bridling, and more!

- Working with spooky objects and obstacles

- Learn essential skills for young horses such as picking up feet, lunging, and more!